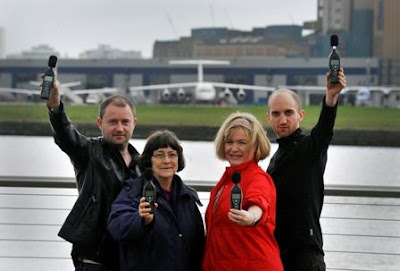 Research carried out by Fight the Flights (1) in alliance with University College London (UCL) and London 21's Mapping For Change (2) has shown that some residents living under London City Airport flight paths are experiencing noise levels much higher than many people under the Heathrow flight path in West London.

Local residents were asked to record the noise of planes (3) overhead using hand held noise monitors on loan from UCL. They were also required to record their emotions in response to the noise. Some took photographs of the sources of noise. The residents were from a wide area of east and south east London. Some of them lived under the controversial new flight paths introduced last year by the Civil Aviation Authority (4).

Noise levels measured ranged from 87decibels to 35 decibels. 87 decibels is higher than a plane flying over Kew Gardens in West London and comparable to the noise of a food blender or lawnmower. The emotions described ranged from irritated to relaxing for the scale of the readings taken. Whilst noise data was being collected the volcanic ash cloud also halted all flights over the UK for a few days during April, giving residents a unique chance to compare a quiet no flight period with business as usual. During this time measured sound levels dropped dramatically with the majority of readings falling between 40-50dbs which is comparable to a refrigerator humming. Few noise events measured above 50dbs.

These residential noise readings in normal flight periods can also be contrasted to The World Health Organisation recommendation that noise levels should be less than 35db(a) in classrooms to allow good teaching and learning conditions and under 40db(a) outside of a bedroom overnight to prevent adverse health effects from night noise (4).

Fight the Flights Chair Anne-Marie Griffin commented “This project highlights just what noise levels residents are having to put up with under the flight paths in east and south east London, Fight The Flights plans to carry out a more extensive project in the future with UCL. It should not be forgotten that East London suffers a double whammy, of not only London City Airport Flights, but also Heathrow flights overhead adding to the misery.”

A Redbridge resident commented "This used to be a peaceful quiet area to live. The planes have single handedly changed that, and I am angry that I was not offered any opportunity to comment on either the expansion of London City Airport nor the change of the aircraft flight path, which has so compounded the existing problem of aircraft noise in my area over the last couple of years. Another resident said that '”I have been affected by more aircraft noise than ever before and I was surprised to discover that neither residents of Waltham Forest nor the council had been consulted by Newham Council on London City Airports application for the expansion of flights “. Another stated "the noise due to the increase in jets has increased, the no flight period allowed us the luxury to have windows open without having to close them due to excessive jet noise from London City Airport and Heathrow flights commencing from 4.30am over the borough of Greenwich".

Dr Muki Haklay of UCL commented:  “Mapping for Change was set up to support community action and citizen science. We are pleased to see the community’s use of the noise meters and the methodology of noise mapping that we have developed to record the level of ambient noise and their level of emotional stress that noise can cause. The mapping of the personal experience and the measured level of noise is useful in communicating the influence of urban noise on communities”.

Louise Francis of Mapping for Change stated: “Contrary to recently published online noise maps, which are created using computer-based models, the results collected by the community reflect actual ambient noise readings. The UK Government have been creating noise maps that show the predicted level of environmental noise from industries, airports, and road and rail networks in response to the EU’s environmental noise directive. The current exclusive system used to calculate various noise sources does nothing to look at cumulative ambient noise, that is the noise communities are actually exposed to”.

Fight the Flights is calling on the new coalition government to act on the unacceptable noise levels from current aircraft activities and to halt all further expansion plans at London City Airport and new airport developments in East London. Anne-Marie Griffin stated that "the levels of noise being measured  across East London should send shock waves of concern to the heart of the government. It isn't only about residents being disturbed, it's also about the effect on public health and the economic cost of that". Excessive noise levels have been shown to have a detrimental effect on human health and associated illnesses are already over represented in the Borough of Newham.

Fight the Flights is legally challenging the decision by Newham Council to approve the expansion of flights at the airport in the High Court in London on 18,19 November 2010.

The noise mapping slide and the noise comparison table will both be available on the FTF website in due course, or provided upon request.

Posted by Fight the Flights - Not Anti Aviation - But Anti Expansion. at Monday, November 01, 2010

AIRCRAFT NOISE & WHO TO COMPLAIN TOO

You can also report complaints directly to the airport - but you are highly recommended to also copy in (or call) Robin Whitehouse at Newham Council on any correspondance regarding complaints so that accurate complaint levels are recorded.

Do you know how the proposals could affect you and your area? Some areas which currently have few aircraft overhead could find this changing in the future. Other areas may see a slight decrease in passing aircraft - but perhaps not a noticeable one. Although the consultation period has ended you can still see how the changes will affect you by clicking here.

An"Intelligent website and blog" - Dave Hill of The Guardian